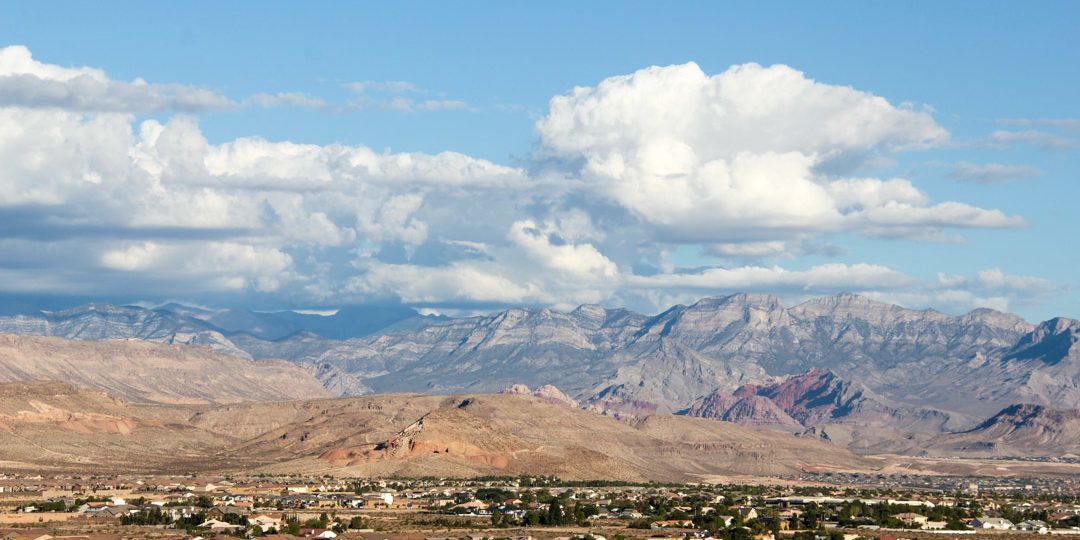 Las Vegas summers are hot but not long, and the rest of the year the weather is like the California Coast

Southern Nevada has some of the most moderate weather in the country: sunny and 60s in the winter and high (but arid) 90s or low 100s in the summer, with marvelous springs and falls. In the winter, you’ll see visitors from cold country in shorts and T-shirts. But your blood will thin a bit after living in the Las Vegas weather for a while, and you’ll bundle up more.

The Mohave Desert, home to Las Vegas, is an arid climate, with humidity in the summer in the teens or 20s percentile. That means 90s and low 100s in Las Vegas is much more comfortable than 80s in a humid environment. And there are virtually no flying bugs to bite or annoy you (although a few crawly ones).

Even in the toasty summers, Las Vegas is a small enough metro area that the heat doesn’t soak into the concrete during the day, and evenings in the summer are fairly balmy. If you buy a house here, it will be comfortable outside with a patio fan, and great for grilling or socializing.

Las Vegas does get some uncomfortable wind, particularly in the winter, when you’re less likely to be outside. But it tends to be a day or two event, not a seasonal bummer. It’s often light jacket weather in the winter, and very rarely anything more than regular jacket weather. Leave your parka up North.

You will not miss the snow!

The health and attitude value of good weather

I hail from a Midwestern family from Wisconsin and Upper Peninsula Michigan (yes, we’re Yoopers, for those who know what that means). My grandparents came to Green Bay and Milwaukee in the mid to late 1800s. (Grandpa DeKeyser played on the first all-city Green Bay football team in 1910 – pre-NFL — and that team photo hangs proudly in many a DeKeyser household.)

We moved to the desert Southwest for a typical (at the time) reason: an asthmatic brother who the doctors said would not survive to adulthood in the wet, frigid Great Lakes. That was in June (Tip: DON’T move to Phoenix in June), and the dry desert air cured Bill almost immediately. You may remember those Dristan commercials that promised the pill was like “sending your sinuses to Arizona.” (See it here:).

The dry desert environment that Las Vegas and Phoenix share has done the same for thousands of cold weather migrants.

We did miss our cousins and relatives “back home” as kids but quickly became accustomed to a universe without ice, snow, and numbing cold. (Our current family snow policy is: We visit it. It doesn’t visit us, uninvited and unannounced.) Snow now is a short drive away . . . and a short drive back.

Those “seasons” that so many wary transplants claim to miss are but an hour’s drive from anywhere in Las Vegas, up Mount Charleston (there’s even a ski resort up there), or a few short hours to Utah, Arizona, or California.

I guarantee it: You will not miss the snow.

Mountains that surround Las Vegas are dusted with white in the winter, making them picturesque and sufficiently distant. We don’t drive daily in snow or ice.

Meanwhile, you are able to get out and do things without bundling up or worrying about driving conditions. You can play or cook outside the entire year with little accommodation in the Vegas weather. Your social calendar is not set by the weather report but rather by what you and your family and friends want to do at the moment.

If you like the outdoors, you have comfortable weather in the Las Vegas valley in all but the dead of summer. And then you have great weather in the next door mountains or short drives to southern Utah or northern Arizona, both also incredibly scenic.

Welcome to the (nearly) year-round outdoors.

But doesn’t California have perfect weather? How can you top that?

In the summer, yes. The rest of the year, not so much. Let’s look at averages (the first two numbers below are average high and low):

Click here to get your free RetireNV book cover