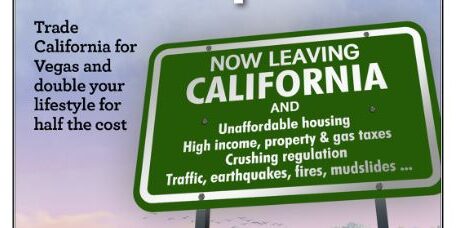 Were it not for the clueless arrogance, the attempts by California pundits and politicians to find solace in a new report about the state’s middle-class exodus would be funny.

Those California-enamored souls have been fawning over a University of California survey released in July claiming that the much discussed abandonment of the Golden State is an overblown myth. Their proof: Only (emphasis mine) 23% of voters there say they are seriously considering dumping California. And that’s 1% less than the last time they were asked back in 2019 (a statistically insignificant difference that falls within normal polling error).

Other positives that supposedly debunk the exodus include:

“The empirical data will be, at once, disappointing to those who want to write California’s obituary, as well as a call to action for policymakers to address the challenges that have caused some to lose faith in the California Dream,” University of California Regent John A. Pérez said in a press release about the survey.

Start with the oft-cited is UC San Diego survey that found Californians, by a 2-1 margin, still think it’s a great place to live.

Allow me to concede some of the fabulous features about California: the beaches, coastal weather, wine country, Yosemite and other icons of the outdoors, the variety of life from San Francisco to LA, the laid-back lifestyle of San Diego, and the scenic vistas of Highway 1. Despite its problems, there is a lot to love about California. (I say that as someone who lived there four times in my life.)

Nonetheless, the survey cheerleaders are cherry-picking sentiments and ignoring facts. That 2-1 margin, for example, also means that a third of the respondents do not believe it’s still a great place to live. It takes a stretch of optimism to believe that it’s good news when nearly a quarter of the people living there are considering leaving (including 40% of San Franciscans.)

As for the “normal” out-migration, that ignores that, for the first time in history, California is losing a congressional seat. It would be losing more were it not for international immigration.

Booster claim that millionaires are not leaving and venture capital investments remain strong. An analysis reported in the UC studies says that – despite the highest income tax rates in the nation – millionaires are not fleeing. (Some high profile ones have left with their companies or are in the exit lane though, including Tesla and Elon Musk, Charles Schwab, Larry Ellison and Oracle, Hewlett-Packard, and Palantir co-founder Joe Lonsdale.)

So, while California may not be experiencing something like a Depression-era Dust Bowl exodus to places like Texas, Nevada, and Las Vegas, it’s losing native population, witnessing growing income inequality, and has destroyed its “land of opportunity” luster for much of its middle and poorer classes.

That’s not exactly billboard material, regardless of what the academic and political beneficiaries of the state’s policies and problems would have us believe.

Majority of Californians still believe the state is ‘Golden’

Why some tech companies and billionaires are leaving California

Get the free book:

Go to www.DumpCal for a free book on why people are leaving California.