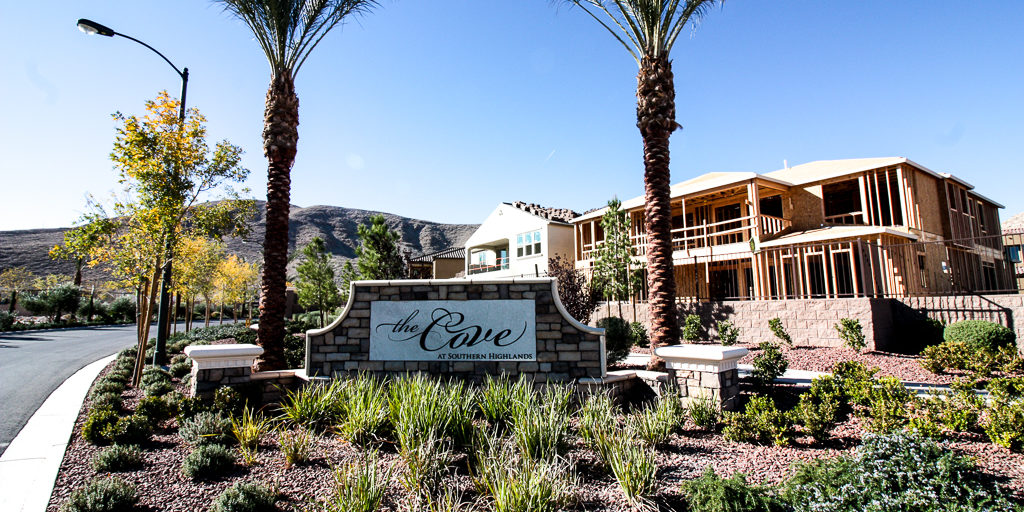 Pulte, The Cove at Southern Highlands, is gated with community pool.

Pulte Homes is building two ranges of mid-market priced homes in Las Vegas at The Cove in Southern Highlands with open floor plans and lots of options that include dual masters, two-gen suites and work-at-home spaces.

The range is wide enough to accommodate a huge family that demands (or at least wants) a huge kitchen with more cabinets than two standard kitchens . . . and a couple who might want to live with parents or boomerang kids. Or people who just want a fabulous guest room.

Prices in the seven models range from the high $300s to the high $500s, with lots of steps in-between. Most are in the $400s. All these neighborhoods will be gated.

Map to the Cove at Southern Highlands

While that might sound pretty far south to people in Las Vegas who live north or northwest, it’s few stones’ throw from Interstate 15, which is a quick shot into central Las Vegas, and it’s the traffic-forgiving direction during rush hour. It’s not close to major shopping – yet – but the freeway makes getting there easy and most of the neighborhood retail and amenities are there. Plus, the M, South Pointe and Silverton are close by, and a new Costco is going in just a bit east of I-15. So you won’t want for those elements. 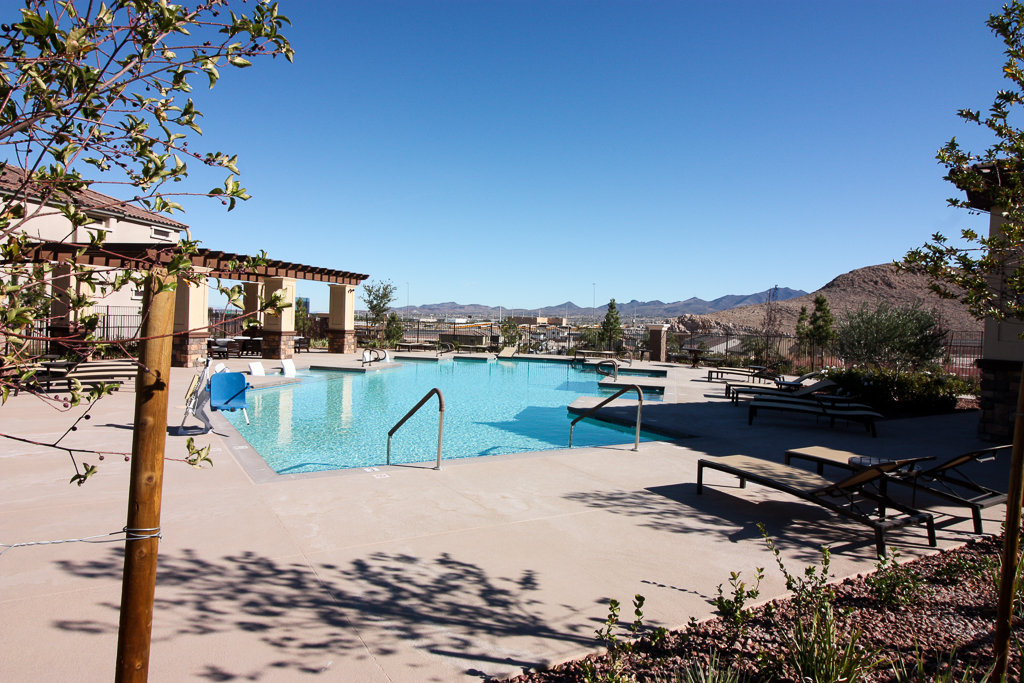 Community pool at the Cove at Southern Highlands

The development also has a community pool, common turf area and activity amenities like grills and connected trails. It’s also near Southern Highlands Golf Club and The Spa at Southern Highlands.While the set-up and target audience for these Pulte homes vary widely (which makes for more varied and therefore saleable neighborhoods when they mature, by the way), some features seem to run through most of them.Most have open floor plans. There are downstairs and handy powder rooms, and the kitchen pantry storage is more generous than I’ve seen – in some cases fabulous. If you like to stock up at that new Costco, there’s a convenient space to store that stuff. They also tend to have large laundry rooms. 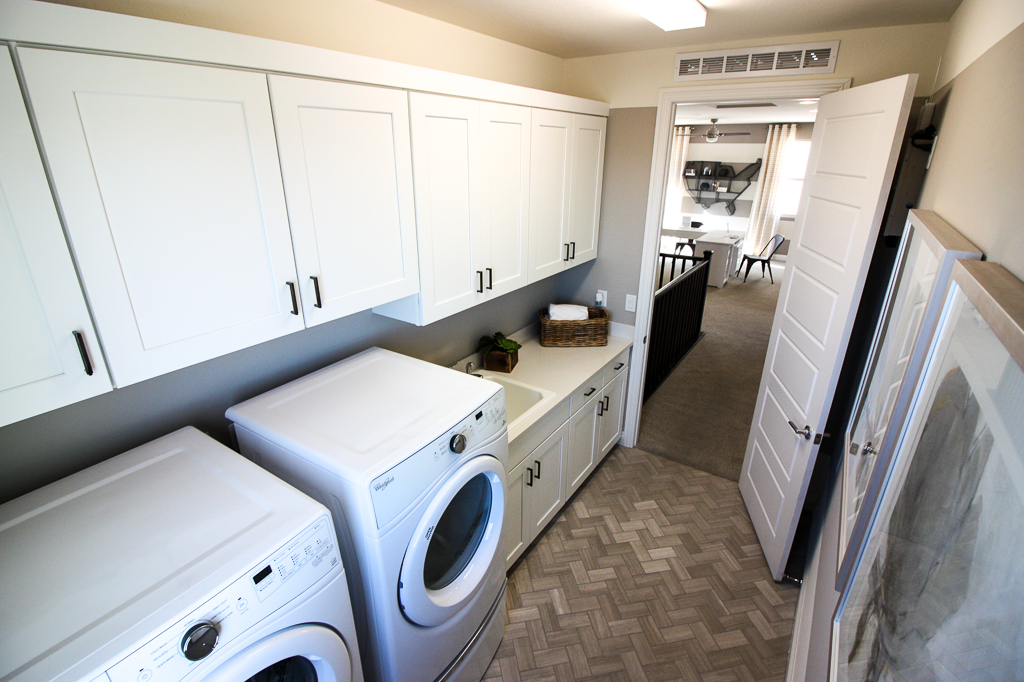 The public space in most models is very open and flows well, and incorporates the back patio space into the feel of the living area. Most have L-shaped kitchen-great room-dining area set-ups, with the kitchen and living area being the long part of the L and the dining area being the boot toe. Pocketed between the living and dining areas on most models is a covered patio. You can get those trendy but enormously functional stacking slider glass doors on both, which provides an easy-to-use access to the yard. That’s not only fun, but it greatly expands the living space and allows families to enjoy the generally balmy weather of the Las Vegas desert.The back yards are fairly standard for Las Vegas — which is to say, not very large. Larger lots tend to go first, even with a lot premium, because you can’t add more dirt later.To get to the Cove at Southern Highland, take I-15 south to St. Rose/Southern Highlands and go right off the freeway and then an immediate left at the Southern Highlands entry sign. Take the first right after that to see the two Pulte (and one Woodside) communities. 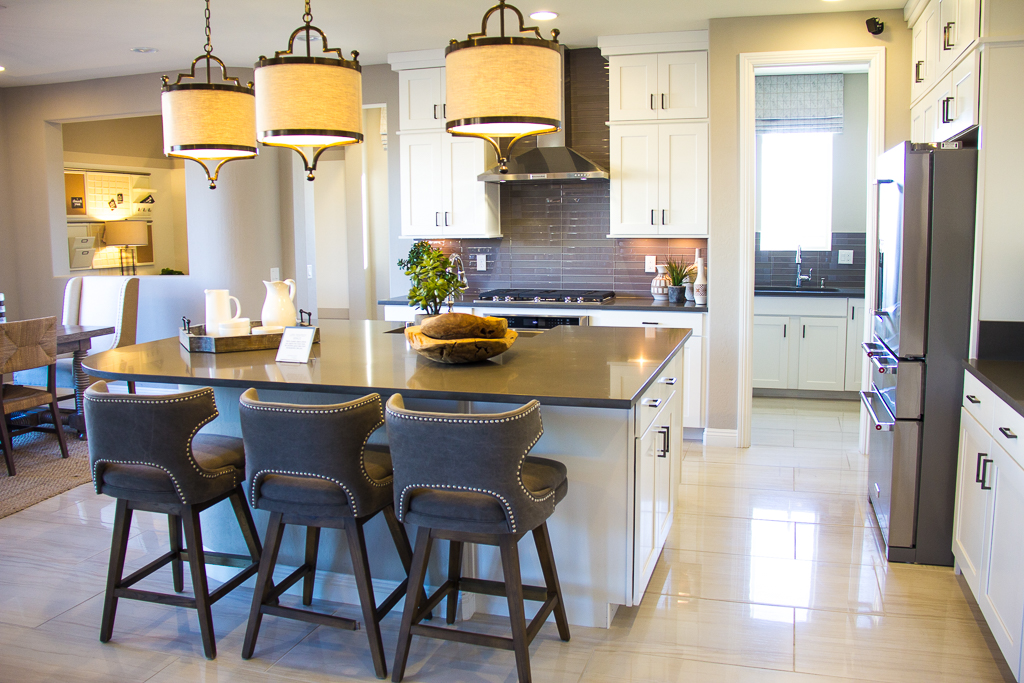 Kitchen in Casoria model, Pulte homes at the Cove at Southern Highlands

Here are the model features and my notes on some of them: 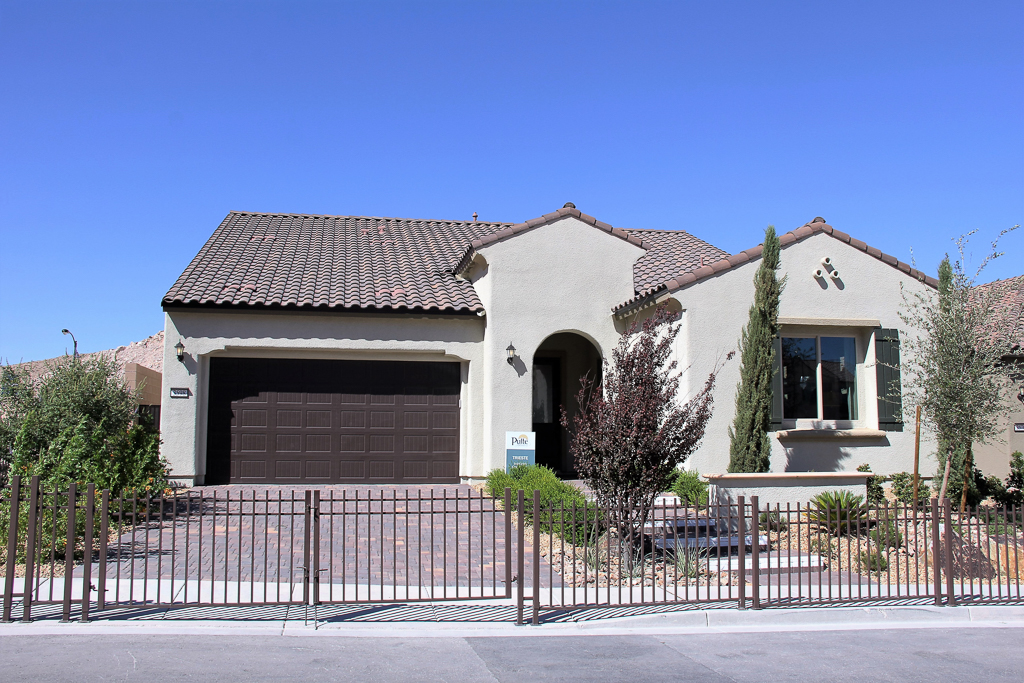 Trieste model, Pulte homes at the Cove at Southern Highlands 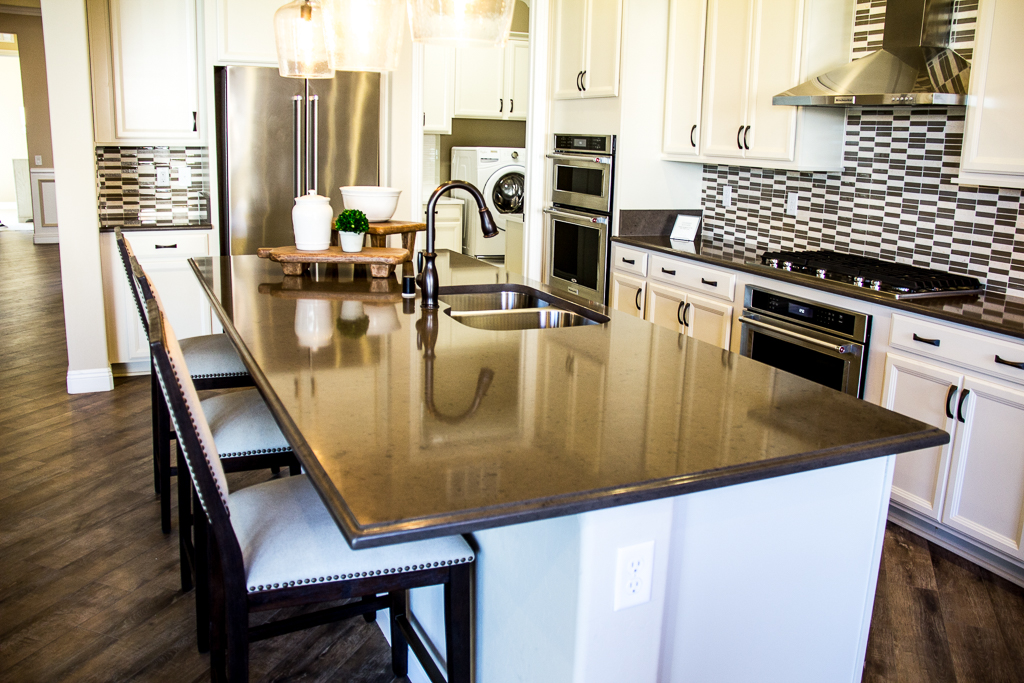 Hal’s notes on Trieste: This model would be great for a couple or a two-gen family – or just a great guest room – as the second bedroom has all the features of the master, just a little smaller. The hallway office could be a third bedroom. Like the other models, it has a great pantry, and the flow to the back yard is good. 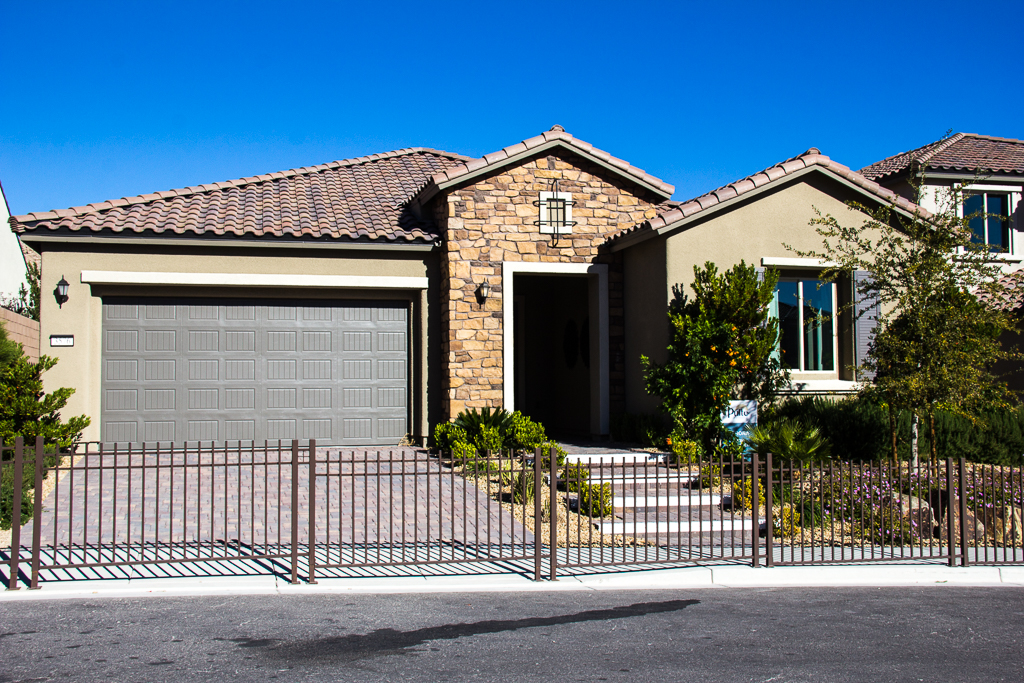 Hal’s notes on Verona: Two bedrooms up front share a full bath, and the true master is in the back of the house. The Verona features an impressive dining room, which could be used for other purposes. The master bathroom is large; the closet (2 ½ by 4 paces) is not as big as other models. 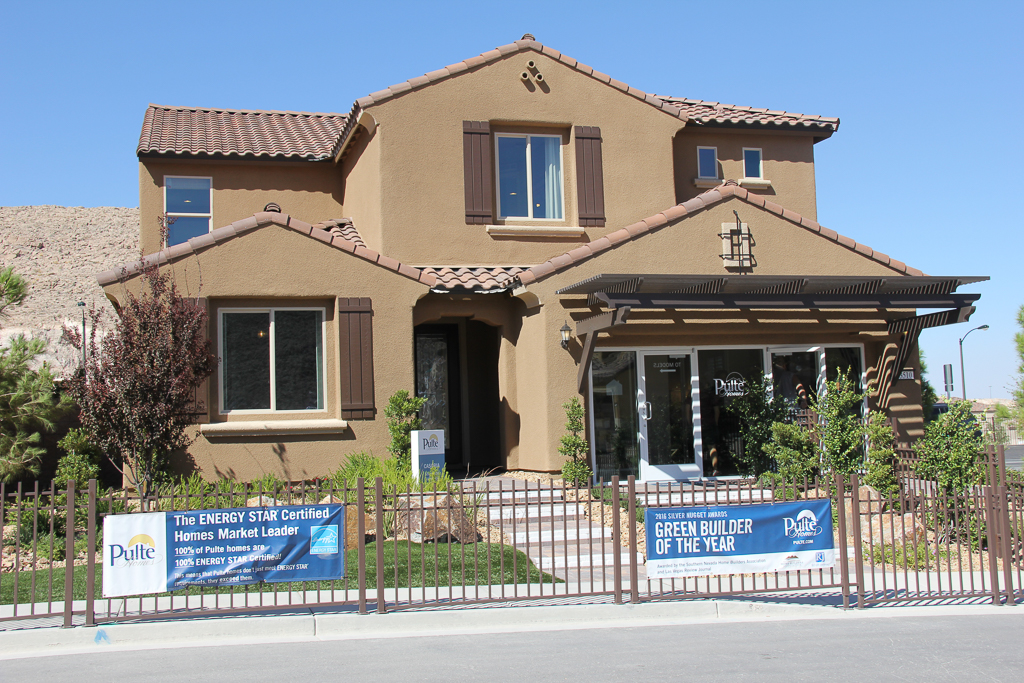 Casoria model at the Cove 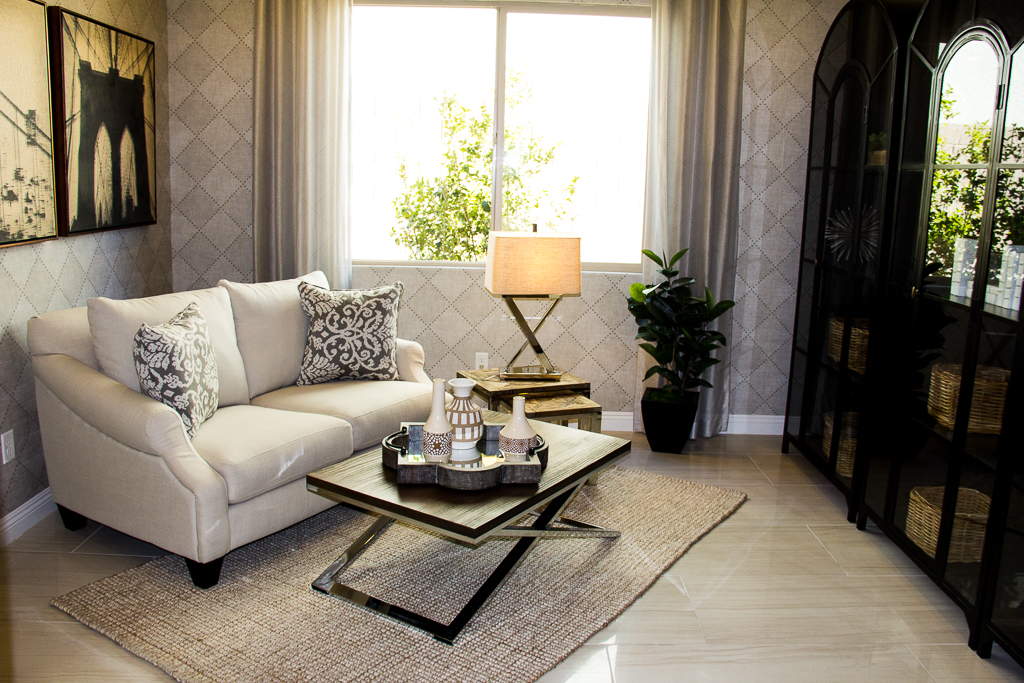 Relaxing in the Casoria model at the Cove

Hal’s notes on Casoria: The most interesting option in this model is a large pantry converted into a hot room, with a single large gas stove burner, a sink and cabinets. It’s a place, I assume, that you can heat up the food without steaming up the entire house. It has a downstairs bedroom that’s a two-room suite, which could be a two-generation set-up. There are two loft areas. Also off the kitchen is a mini-office with room for a desk and a little more, a trend we’re seeing in new Las Vegas developments these days. 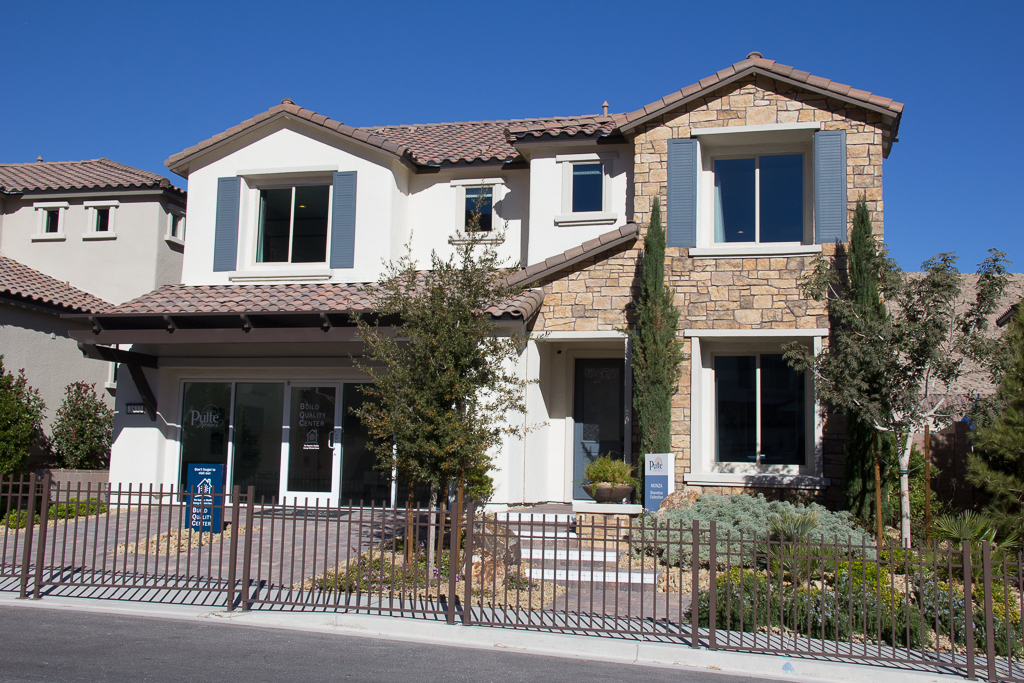 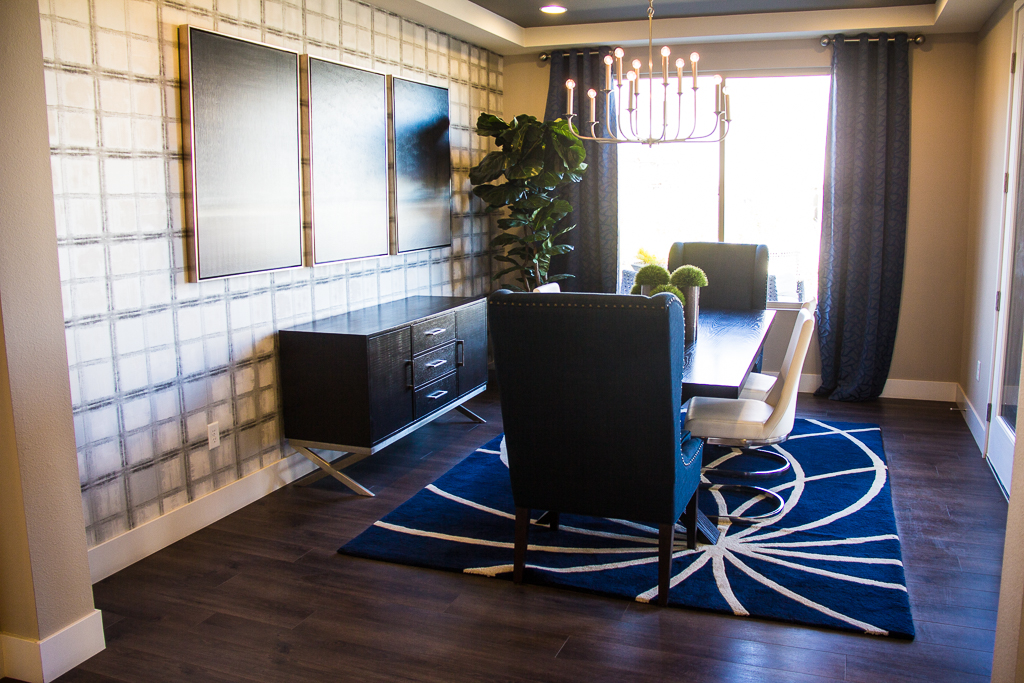 Hal’s notes on the Monza: Two spacious upstairs lofts. Bedrooms have decent closet space. One secondary bedroom has its own bathroom. 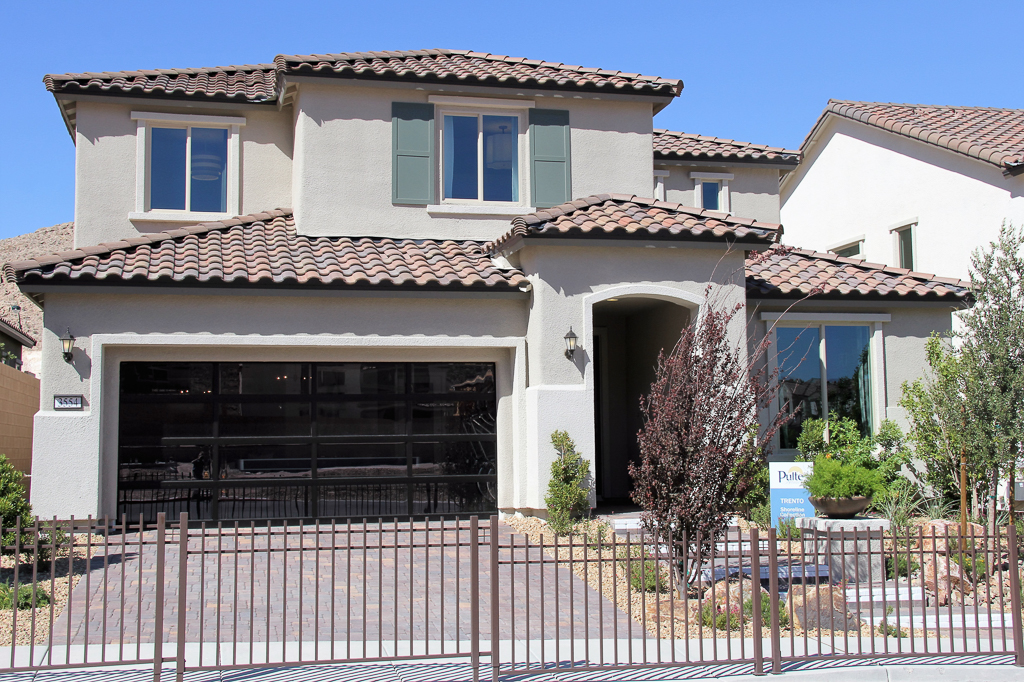 Trento model at The Cove at Southern Highlands 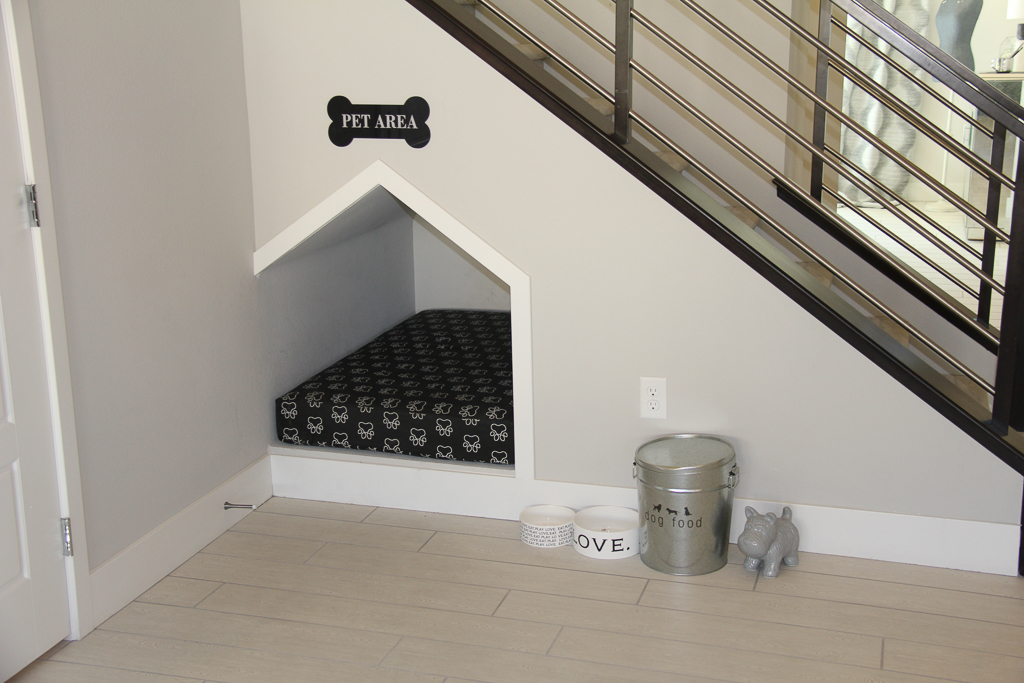 The Trento model makes good use of the space below the stairs for the family pet.

Hal’s notes on the Trento: This was my favorite of this collection because of its openness, which is evident from walking in the front door. I met a couple that had just purchased one and were awaiting construction. A home office was just off the front door, but at an oblique angle so it didn’t close off the light. This model also has a kitchen office. Most quaint was the pet space under the stairs that gives the pooch a “Spot” that’s still connected to the living space. Another great feature, but an option, is an owner’s retreat off the master that would open to an optional balcony. The model is set up with a cabinet/coffee bar and wine cooler with a TV set – a mini living room area.

The Retreat at the Cove 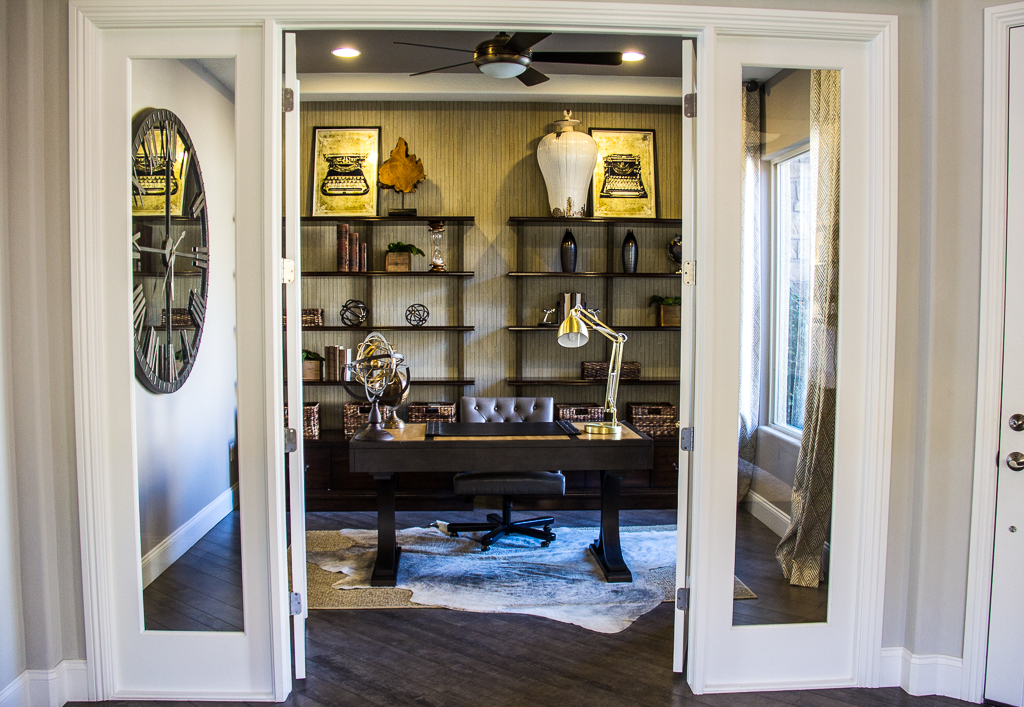 Office at Vittoria model close to the front door. Across is the dining room that also could be a conference room for work. 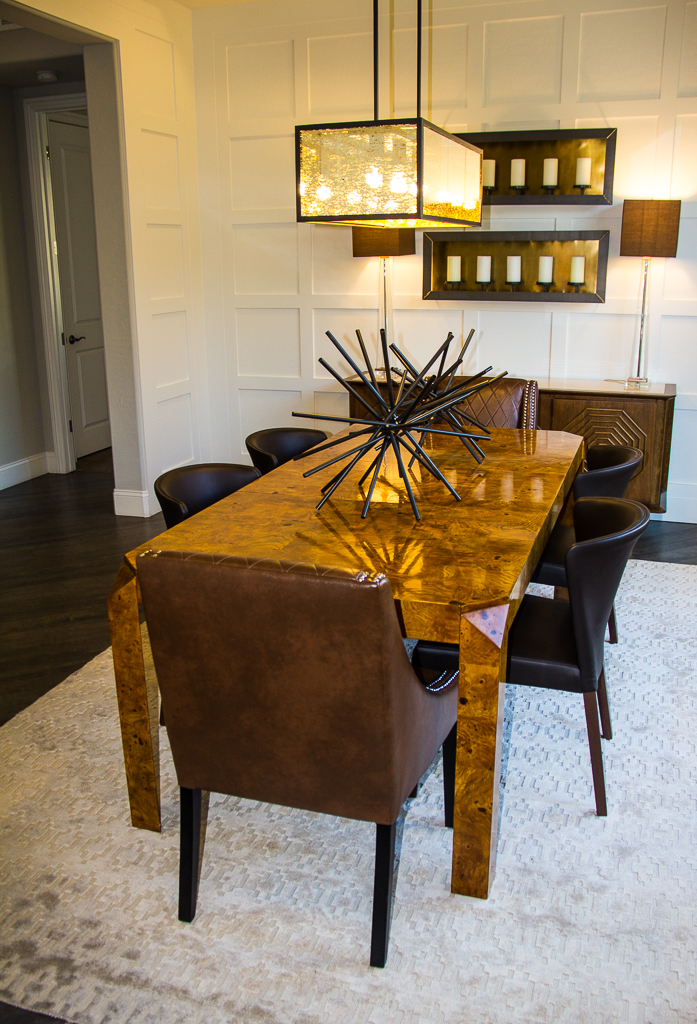 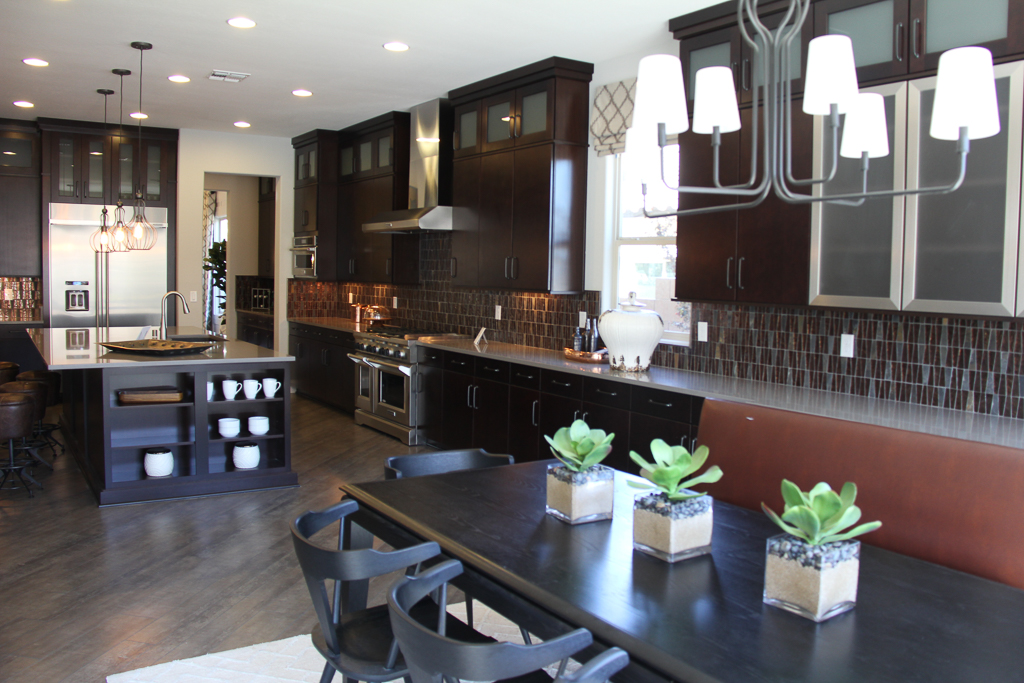 The Vittoria has a huge kitchen with plenty of cabinets for storage. 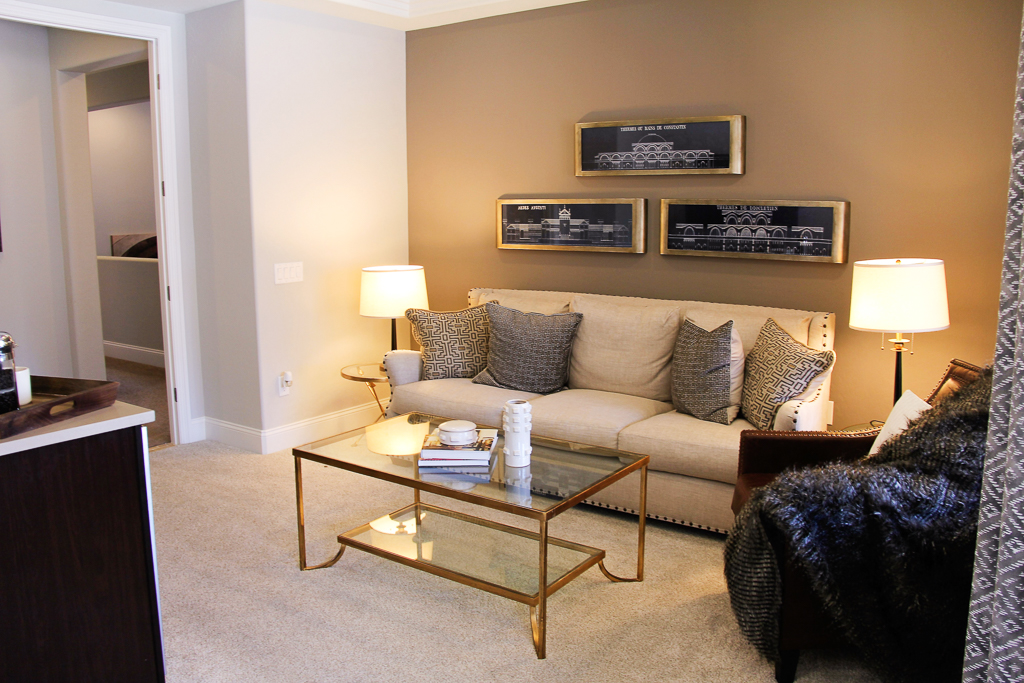 The retreat in the master bedroom in the Vittoria

Hal’s notes on the Vittoria: If kitchen cabinet space and storage is high on your lists of wants in a new home, don’t pass this one by. Cabinets line the long wall all along the kitchen and continue into the informal dining area – plus there’s a butler’s pantry with more cabinets and a huge pantry. If you’re kitchen people, check this one out.Unlike most houses, which you enter in the middle of a rectangle, this model has some unique style to the front door, placed sort at the point of a triangle. You have to see it to appreciate. Upon entering, you are greeted by a spacious office on one side and large formal dining area on the other – large enough to be a business conference area. Two bedrooms are downstairs –one up front well separated from the rest of the house that could be a guest room and another in the back of the house that’s large enough to a second master downstairs. (The model has it set up as an exercise room, a good use for the space). The master upstairs opens to a retreat, a mini living area that has a coffee counter and wine cooler opposite a small couch in the model. The master also opens to a large covered balcony, which is accessible from the upstairs loft as well. The bathroom is immense, the size of a regular bedroom. The closet is big enough that the model sports a small couch inside.All the secondary bedrooms have their own bathroom. 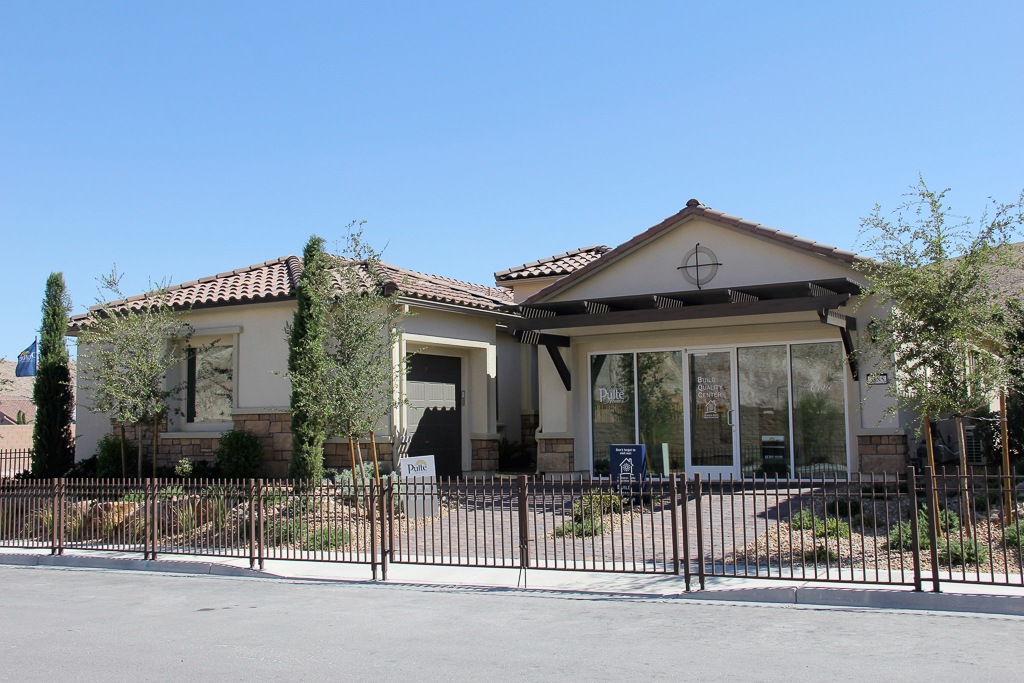 Easy access to the patio allows for indoor-outdoor living. 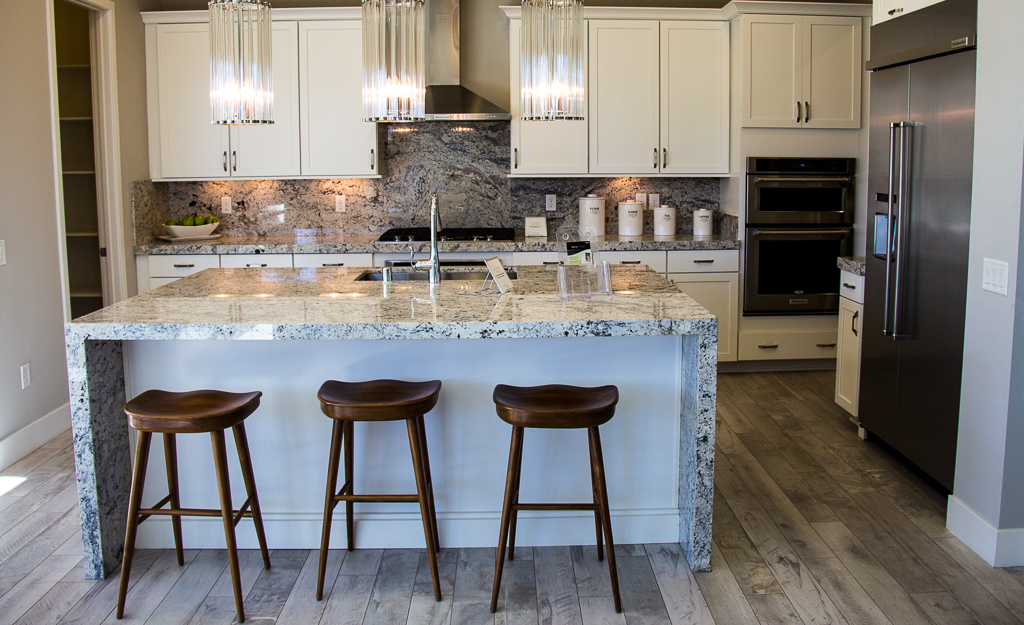 Hal’s notes on the Cesena: The Cesena model has an alcove entry – both into the main house and a separate door into a two-gen or small apartment unit. The latter enters into a small living space with a bedroom that has its own full bath. The closet are for this, though, is relatively small – like coat closets – perhaps to keep guests from lingering too long. Inside the main entry is the “gathering area,” an open space before the kitchen/great room big enough for four chairs around a coffee table, great for chatting or reading or resting. The main public space had great light, with the dining area all glass, and (again), a great pantry. The master bedroom in the model adds a sliding barn door (a trendy feature) between the master bedroom and bath, which allows one person to get ready without disturbing the other’s sleep. (Others should adopt this feature, either by door or design.) There’s also a solar tube in the long master closet, also a favorite feature that should be more present in Las Vegas.